Note:  I found this post on the WordPress blog “Paradise Leased” It’s about the Los Angeles Lonesome Hearts Club which my Great Grandfather Melvin Hatch MD started.  Paradise Leased is a website by Steve Vaught about Historic Hollywood and Southern California Architecture, History, People and Travel.  The original post can be read by clicking the title.

“Are You Lonesome Tonight?” – The Los Angeles Lonesome Club 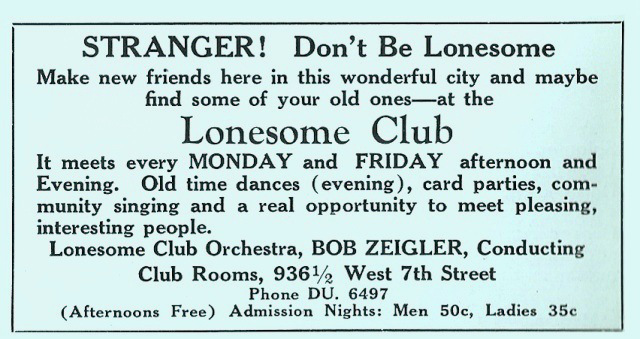 Some day soon, and it’s probably already happening, kids will be asking, “Daddy, what was life like before Facebook?” And with great wonder in their eyes they will inquire, “Was it true that if you had 500 ‘friends’ you actually would have had to have met them?” Shocking as it may seem, social networking did exist in the antediluvian age before computers, it was just done a little bit differently. But then as now, making genuine connections with others could be a difficult, if not seemingly impossible task, whether one lived way down a country lane or in the very heart of a major metropolis. And then as now, many were deeply lonely. 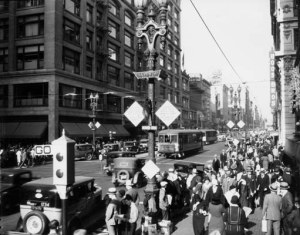 In 1921, one such lonely soul was Dr. M.A. Hatch. A prominent physician in Minneapolis, Dr. Hatch had relocated to Los Angeles to help rebuild his flagging health. Having to leave his wife and son behind during his long recuperation, Dr. Hatch found the painful sting of loneliness almost too much to bear. He had optimistically believed that making friends in such a huge, bustling city would be easy. What he soon realized was that the opposite was true and the aching loneliness was rendered all that more painful by the irony of being surrounded by literally hundreds of thousands of people. Convinced that in that great sea of humanity there must be others in the same predicament, Dr. Hatch ran an ad in the Los Angeles Times in July 1921 asking for anyone who felt lonely and who wanted to make new friends to join him in a room at the Normal Hill Center at Fifth and Hope Streets to discuss what could be done about the problem. 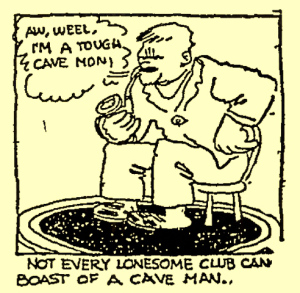 At the appointed time, thirteen brave souls fought back the near paralyzing pain of shyness and gathered together for the first meeting of what was to become Los Angeles’ celebrated “Lonesome Club.” One of those first lucky thirteen was an old prospector named “Jock” Fletcher. A native Scotsman with a burr “you could cut with a knife,” Fletcher had found Los Angeles to be a far lonelier place than the remote desert country he had once called home. A gifted poet, in spite of his inability to either read or write, Fletcher found a ready and appreciative audience with his fellow Lonesome Club members and was quickly adopted as its resident “Caveman.” Fletcher was one of the Club’s early success stories, finding a soul mate in the form of a charming widow from Milwaukee, whom he took as his bride and spirited happily away back to the more hospitable desert wastes he had originally come from. It was the first of many, many matings brought about by the Lonesome Club.

When he first conceived of the idea, Dr. Hatch could not possibly have known it would strike a chord within so many people and like the social networks of today, the Lonesome Club became an overnight phenomenon,  going from an initial 13 to 300 to 20,000 within just a few years. The Club was so popular it had to continually find bigger and bigger venues to accommodate its ever-swelling ranks. The club’s membership was surprisingly diverse with not just older people but many younger ones as well, mostly males, “Nice steady young men for the most part,” according to reporter Alma Whitaker, “the kind that have home ties back in some small town, and who enjoy the society of the older folks, and get as much pleasure out of dancing with ‘somebody’s mother,’ who is lonesome here, too, as with some frisky little fashion plate.” 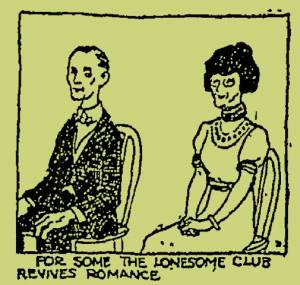 For a 50 cents (35 cents for ladies) membership, the Lonesome Club offered two “socials” a week, Monday and Friday at 7:00. The first hour was for introductions, mingling and cards, the second was for a short program of entertainment, and the third, which was the most popular, was the dancing. “For it is when the dancing hour arrives,” wrote Whitaker, “that those timid lonesome ones unbend and skip themselves out of their shells and into each others’ lives.”

By the late 1920’s, members of the club could dance to their very own Lonesome Club Orchestra, which  proved such a popular attraction, their concerts were regularly broadcast over radio station KHJ. And in 1931, the club achieved one of Dr. Hatch’s long dreamed of goals – a venue all its own at 937 West Ninth Street in downtown Los Angeles. The elegant Lonesome Club Ballroom was designed by famed Los Angeles architect Alec Curlett in sleek art deco style, covering a very spacious 152′ x 97′, which could easily accommodate as many lonely souls as Los Angeles had to offer. 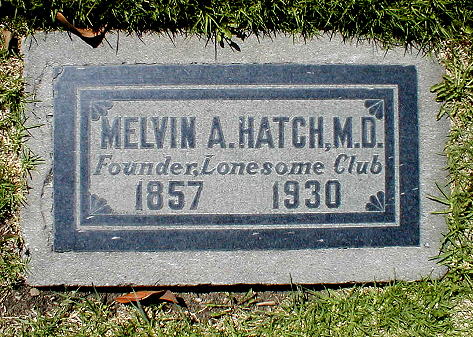 Tragically, however, Dr. Hatch had not lived to see this happy event. On April 8, 1927, a bandit had raided the Hatch home at 2149 Echo Park Avenue to rob them of the proceeds of that night’s dance. During the course of the robbery, the Hatches’ son, Melvin Earl, tried to protect his mother and was shot dead. The shock proved so great for Dr. Hatch that he suffered a paralyzing stroke from which he never fully recovered. He died February 28, 1930 at age 73, a horrible irony that this man, who had brought so much happiness to so many lonely people, would die of a broken heart.

After Dr. Hatch’s death, the Lonesome Club continued under the guidance of his widow Violette. Although it remained popular for a few more years, it was clear the Lonesome Club’s appeal had run its course and by the end of World War II, the Club had faded into memory. Even the handsome Lonesome Club Ballroom vanished, felled in the wake of the Harbor Freeway construction in the early 1950s. No one can ever know just how many lives were changed by Dr. Hatch’s novel idea, how many suicides were averted, how many lifelong friendships were made or how many love stories were born, but there were, no doubt thousands, who, thanks to Dr. Hatch, when asked “Are you lonesome tonight?” could truthfully and proudly answer, “No.”