A blurred finger print, and a mother’s memory of two short sentences spoken in correct English by a strange voice more than three years ago—one just before and the other just after her son had been shot to death by a bandit—proved sufficient recently to hold Percy Harry Eberly for trial on a murder charge. 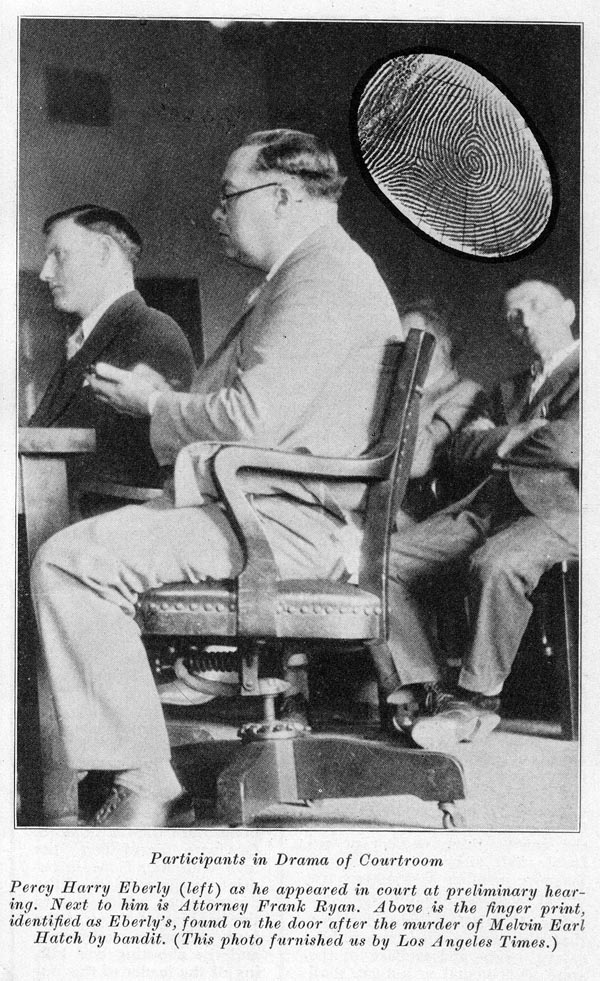 The finger print was found the day following the murder, by Police Sergeant Fredrickson on a closet door where the bandit had locked Hatch’s father, Dr. M. A. Hatch, since deceased, while awaiting the return of Hatch and his mother to their bungalow home at 2149 Echo Park avenue.

The mother, Mrs. Violet Hatch, testified that she is the operator of the Lonesome Club at 936 1/2 West Seventh Street, and that she was in the habit of returning to her home about midnight with the night’s receipts, which on that occasion amounted to about $400.

Reaching her residence, she said, she found the door locked, and called her husband. He unlocked the door, at the same time warning her that an armed robber was present. From behind her an instant later a masked man enunciated the command: “Give me that bag.”

She handed over the bag, which contained the money, she declared, and called to her son, who was coming from the garage, to stay away. Instead, he dashed up the steps in an attempt to grapple with the intruder. As he reached the top step the bandit dropped the bag, turned and fired one shot. Young Hatch collapsed. Ordering: “You lie there and don’t try to get up,” the robber fled to his roadster and disappeared.

A neighbor, Charles Freemen, 1615 Cerro Gordo street, fired a shot after the fleeting machine, he testified, which apparently failed to take effect.

On July 1, last, Eberly was surprised by officers as he slept with a .45-caliber revolver under his pillow. He was not arrested for the murder of young Hatch, however. He was detained because police believed him implicated in robbing a bank messenger of $2,130 a few days before.

He was placed in the County Jail and in due time was held to answer to the Superior Court on the robbery charge but still no inkling of his possible connection in the murder came to light. 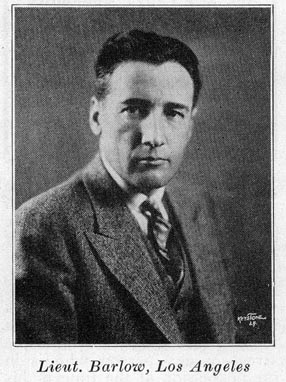 Then, one day about a month ago, Expert Lieut. Howard L. Barlow, F. P. E. of the Los Angeles, California, Police Department, was comparing finger prints of prisoners with those docketed as clews in unsolved crimes of the past and came upon the blurred print taken from the closet door of the Hatch home three years ago. The old print matched with those recently made from Eberly’s hands. The police then called Mr. and Mrs. Hatch.

Eberly, with other prisoners, was placed behind a screen through which voices penetrated but through which faces could not be distinguished. One by one the prisoners spoke a few words and when Eberly’s turn came, Mrs. Hatch said: “That is the man; I could never forget his voice or his face.”

Later, face to face with the suspect she reiterated her conviction that he was the murderer of her son.

Mrs. Hatch testified that the bandit’s voice remained in her memory because she was surprised that he used correct English.

Young Hatch died next morning from the effects of the bullet, which struck him in the abdomen, police and autopsy surgeons said. Finger Print Expert Barlow identified the print found on the door by Fredrickson as that of Eberly. Eberly’s attorneys, Joseph and Frank Ryan, offered no defense.

Eberly also is facing Superior Court trial on five robbery charges, on which he was bound over.

In court, Mrs. Hatch said that she was held up recently when returning from her club, and robbed of $250. The robbery took place as she emerged from her garage after putting away her automobile, she said.