A single finger-print and a mother’s memory of how two short sentences were spoken by a strange voice more than three years before were not much upon which to build a murder case in 1930.

Erl’s dad (Melvin) and his mother (Violette) moved to Los Angeles first.   After starting the successful Lonesome Club (Click here for information on the club) they asked their son Erl and his family to join them.   Unfortunately, soon after Erl and his family arrived, He was murdered trying to protect his mother.

The murder case received a lot of news coverage because of the way the murder was caught. It was one of the first cases where a single fingerprint was used to identify the murderer.   Over the following decade, a number of magazines covered the story.

I have been able to find many articles thanks to my Aunt Barbara (a newborn when her Dad was murdered) who had never opened copies of two of the magazines.  I had original copies of four magazine articles that were in my Mom’s things.  They were falling apart but I was able to scan them.   Fortunately, for two of them, my Aunt Barbara had pristine copies so I was able to get clean scans.

What follows in these articles is the fascinating but sad story of the murder and trial.

Recently my first cousin, once removed, Mikah Paulson Kutch, found an article in the October 24, 1930 edition of The Sheboygan Press which gives some additional background on the family.

In addition, I found these articles about the Los Angeles Lonesome Club.

Here’s the list of Family members involved or directly affected

At the time of the murder the four children of Erl and Anne Hatch were the following ages; a boy of 8, a girl of 5 (my mother, Mary Ann), a boy of 2, and a newborn girl.

When Anne was buried in 1988 next to Erl’s grave, the love letters Erl had written during their courtship and his WWI military service were placed in Anne’s Casket. As far as I know, there is no record of what was in those letters.

Melvin Hatch Lonesome Club was begun in July 1921 by Dr. M.A. Hatch of Minneapolis, who had come to Los Angeles — like many in the first decades of the century — to recover his health. (He may have also been recovering from a troubled past. According to the Minneapolis newspapers, Dr. Hatch had been convicted of manslaughter following a botched “illegal operation.” While awaiting sentencing in 1917, his office assistant — and chief defense witness — committed suicide, although the circumstances of her death were odd. She died of chloroform poisoning in Hatch’s medical office, where he later found her body.)

They were married August 15, 1889, in  Rutland Wisc at her Mother’s County house 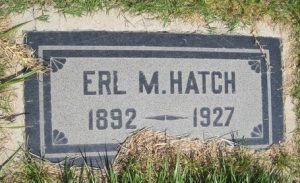