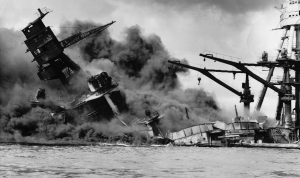 It has been eighty years since the Japanese surprise attack at Pearl Harbor. It affected every member of my parents’ families and changed the direction of their lives.

My father was attending Penn State working toward a mechanical engineering degree when he heard the news the afternoon of Dec 7, 1941. His reaction was to enlist in the Army Air Corp to fly B17 bombers. So many other college students enlisted that he was not inducted until 1943.

My Mom had graduated from High School. She enlisted in the Navy WAVES in early 1942 and eventually became one of a pool of secretaries in Washington DC whose job was to create the historical record of Admiral Halsey’s Task Forces exploits. Dad used to joke that she had been rated as hysterical in her evaluation but someone misspelled it and that is how she got that position. Mom’s reaction to that statement would be to roll her eyes and mutter, “Bill”

I had two Uncles who also served in WWII.

My Uncle Gerard Hughes, was already an officer in the Navy, having attended Annapolis. He spent the war hunting Nazi subs as the captain of a destroyer.

My Mom’s brother Dick enlisted in the Navy as a seaman and saw action in the pacific.

Both of my parents also had brothers who could not enlist.

My Dad’s brother Harry was working for Standard Oil as an engineer building oil refineries. While he wanted to enlist, the war department wanted him to go on building refineries.

My Mom’s brother Bob was declared 4F because of a hearing loss injury. He went on to become a machinist.

My wife’s father, Gaylord, Graduated from High School in 1944 and was on his way to take part in the invasion of Japan when the war ended.

My Dad’s Dad run Standard Oil’s refinery in New Jersey.  At that time, it was the biggest refinery in the world.  He worked to increased its maximum production rate to support the war effort.

My parents also had sisters who did not serve. My Mom’s sister Barbara finished High School near the end of the war. I have enjoyed her stories of being a HS school student in war time LA.

My Dad’s sister, Dorothy, was 15 years older than my dad. Her husband worked in a war related industry and was too old for the draft.

My Mom’s Mom, who was a widow after my grandfather’s murder, left her job at May Co and became a riveter at McDonald Douglas. The story of his murder and trial is found at https://hughes-history.com/the-tragic-story-of-the-erl-hatch/

My one regret is that I only got some of their WWII. stories before they died. I do have stories about how well the Tuskegee Airmen protected his B17. He credits them for his surviving the war. It made him a strong civil rights reporter. More about his experience with the Tuskegee Airmen can be found at https://hughes-history.com/2017/01/the-tuskegee-airmen-and-william-j-hughes/

He also told of how he was part of the first group of American officers to meet pope Leo after the liberation of Rome. He’d go on to share that afterwards he got so drunk that when the Jeep he was in flipped, killing one of the occupants, he just rolled on the ground.

I heard about his Purple Heart injury from shrapnel from Nazi anti-aircraft guns from the Bombardier on his plane. Jim told me about how he bandaged Dad’s head wound on one of my visits with Jim in DC when I was there on JPL business.

My Dad had lifelong friendships with Jim and Gallagher, his pilot. The exploits of his squadron are told in the book “Bloody Skies, A 15th AAF B-17 Crew: How They Lived and Died.” Dad arrived at the airbase in Amendola, Italy, after the entire squadron, the Twentieth, had been wiped out by the Luftwaffe.

The war brought Dad to SoCal in January 1944 for Navigator training. His experience of being in a mild climate but still being able to go up into the local mountain to ski convinced him to move to LA in the late 1940s. There his cousin arranged a date with one of his co-worker’s sister-in-law, which is how he met my mother. But that is another story.

My mom ended up with an encyclopedia scope of knowledge about the island hopping land and sea battles of the Navy and Marines in the South Pacific.

Pearl Harbor changed America Over 400,000 in the US military died in our battle against the fascist states.

They were, and still are, the Greatest Generation.