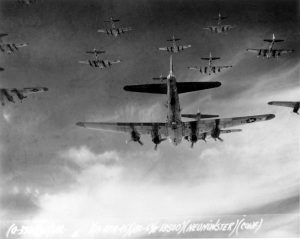 My Dad always told me that the Tuskegee airmen were the reason he survived World War II.

My Father, William Joseph Hughes was born in 1921. He was eight years old when the Market Crashed. Fortunately, his dad – my Grandfather Harry – was the manager of the huge Standard Oil refinery in Bayonne, New Jersey. They had two homes and except for losing his life saving of over $12 when the local bank folded escaped the worst of the great depression.

He started at Penn State in 1939. At Penn State he experienced discrimination as he was pledging at a fraternity and when they discovered he was a Catholic he was told they didn’t accept Catholics.

After Pearl Harbor, he enlisted in the Army Air Corp to fly B-17s. So many college kids enlisted that he had to wait over a year to be inducted. As he waited and then moved through training he became aware of the terrible losses experienced by the B-17 flight crews.   He realized that his chances of living through the war were slim.

In the spring of 1944 he was assigned to the 15th Army Air Corp, 5th Wing, 2nd Bombardment Group, 20th Bombardment Squadron in Foggia, Southern Italy. Just before he showed up, the entire squadron had been wiped out during one mission. He didn’t expect to survive.

Fortunately, 332nd Fighter Group One part of the the Tuskegee Airmen – the all African American fighter group, showed up around the same time. It is amazing that despite the racism of the day, there were still so many blacks who were willing to fight for a country that treated them as second class citizen.

At this time in American history, if you killed a black man in over a third of the states there would be no investigation. And in the rest of the US, there were many communities that banned blacks from living in them.

There was one mission were he was especially grateful for the Tuskegee Airmen as he believed it saved his life.  The mission went like this.

The 7 planes of his B-17 squadron were flying in their tight box formation, overlapping with other squadrons of the 2nd Bombardment group with a Tuskegee fighter flying cap, when he saw a small group of Nazi planes approaching. The Nazi’s had learned that the only way to defeat the box defense of the B-17s was to have a massed attack in formation from one direction which would cause the box to scatter. The Nazi’s need that if the B-17 formation could be broken up then they could shot down the isolated B-17s.

The B-17s crew’s experience was that the white fighter pilots would wait until they could get behind the Nazi fighters after the Nazi’s had attacked the B17 box before starting their attack.  The result was that some of the B17s would be shot down by the Nazi’s in the process. The Tuskegee fighters were difference, they would always attack the Nazis head on.

So the Tuskegee Airman did their usual and dived toward the attack formation, broke it up and the Nazis flew off.  It would be 15 to 20 minutes before the Tuskegee fighters would be back into position overhead to protect the B17s/  Fortunately, during the fight the Tuskegee airman left two of their members flying cap – just in case.

About 10 minutes later, my Dad noticed another larger group of about 50 Nazi planes approaching from the other direction. It suddenly became clear to my Dad, the first attack had been a feint. This was the real attack and they didn’t have their fighter cap. He was faced with the realization that most likely all 28 planes of his group were going to be shot down.

Suddenly, the two remaining Tuskegee airman dove down between my Father’s group and the Nazi’s, they both did a barrel roll and headed straight in the tight Nazi Formation – to a sure death – but they broke up the attack and the 2nd Bombardment Group didn’t lose a plane.

My father realized that these men had – most likely – traded their lives for his. He didn’t actually see if the two Tuskegee fighters had gone down, but that didn’t matter to him.  If they survived,  it would be a miracle.  What he did know was that during the course of the war 84 of the Tuskegee Airmen would lose their lives in combat or accidents.  Defending all white B17 crews that had previously looked down on these African Americans.

My father never spoke or tolerated any racial slurs. He actively supported the civil right movement.   Growing up each year we’d go to the Pt. Mugu Air Show where he would seek out the Tuskegee Airman booth and thank them.

My father knew that he owned his life to these heroes. The Tuskegee Airmen didn’t do it to preserve our way of life but to prove they deserved equal rights. In 1944 in many parts of the US they couldn’t vote and if lynched their killers would go free. The impact on my Dad was to turn him into a civil rights supporter.

The book Bloody Skies: A 15th AAF B-17 Crew: How They Lived and Died Paperback – April 1, 1999 by Melvin W. McGuire describes some of his squadron’s other actions while he was flying combat missions.